A brief guide to Ultra HD and the future of display technology.

4K often referred to as Ultra HD (UHD) is a high resolution broadcast standard that has been around for several years. 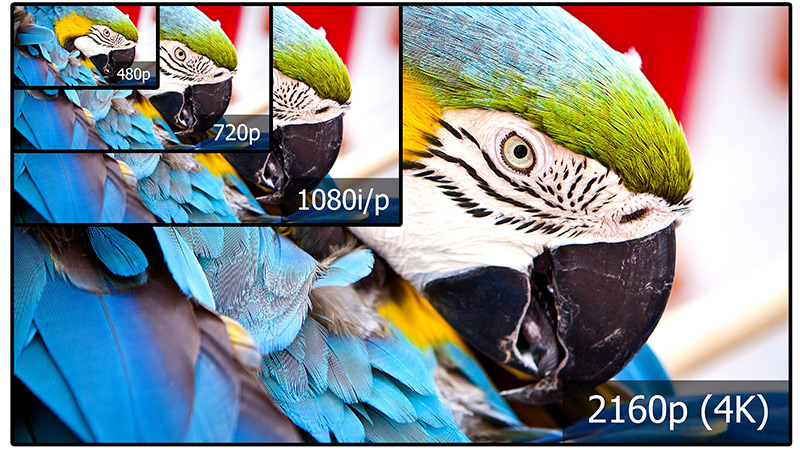 There are slight differences between 4K (UHD) content and that shown on a cinema screen. The cinema standard has more horizontal pixels at 4096 × 2160, resulting in an additional 8 megapixels.

I’ve heard of something called HDR, can you explain?

Now this is where it gets more interesting. HDR stands for High Dynamic Range and allows more image information to be output to screens.

10-bit colour offers 1,024 shades of each primary colour with over 1 billion possible colours. 12-bit colour increases this to 4,096 shades and over 68 billion colours.

Right that all sounds great but what’s the benefit?

HDR provides a much more lifelike and immersive picture as mid-tones, shadows and colours can be presented much more accurately. For example a sunlight scene on HDR may actually make you blink, and colours will be more lifelike with a richer saturation.

Although this technology is still not providing as much detail as the human eye can process it is a significant step forwards. 4K and HDR also take digital to a much closer parity with 35mm film.

There are currently three different standards for HDR:

HDR radically increases the level of NITS. This is a unit of measurement based on candela per square metre (cd/m2) with the HDR10 standard offering up to 1,000 NITS providing huge levels of variation in brightness. Dolby Vision supports a theoretical maximum of 10,000 NITS, but this may not be observable outside of a screening room. NITS is named after the latin word nitere, which is to shine.

In short no. 3D television offered a fairly limited experience requiring glasses, and has arguably been surpassed by VR and 4K. Sales are increasing at a very rapid pace, and look set to outpace the adoption rate of HD.

Netflix, Amazon, Google, YouTube, Apple and most major broadcasters including the BBC and Sky.

Original content including Stranger Things, Jessica Jones, Sneaky Pete and House of Cards are some of the popular shows shot in UHD.

Although 4K content is available on the Ultra HD Blu-Ray format, the current catalogue is fairly limited and many predict that streaming will continue to dominate the market.

What sort of connection do I need?

Less than you may expect. Netflix recommend round 25mbps is an acceptable speed for smooth streaming. Having said this 4K does use a lot of data with around 7GB per hour, although new more efficient codecs leading to continual improvements.

Wait up there what’s a codec?

A codec is software that compresses video signals and unpacks them. Common 4K codecs include H.265 sometimes called HEVC (High Efficiency Video Codec). The more efficient the codec the better it is as compressing data resulting in a smaller file size. Google have developed the open-source VP9 codec that is being used for YouTube.

This is sometimes called Super Hi-Vision and has been developed by Japanese broadcaster NHK. 8K provides an incredibly lifelike picture at a staggering 7,680 x 4,320 pixels (33.2 megapixels). However, the complexities of streaming this content on current network infrastructure is incredibly challenging, and so is mostly aimed at pre-recorded advertising screens and digital signage.

Companies such as Visbit are recommending 12K resolution for VR applications to improve immersion and reduce the levels of nausea some people feel when using devices such as the Oculus, Vive and PSVR.

It’s very clear that 4K is here to stay, and the future will be a lot sharper.

One thought on “Sound and vision: a quick 4K primer”